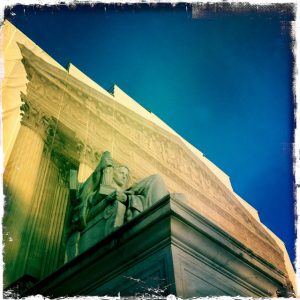 On March 20, 2019, the U.S. Supreme Court vacated a judgment of the Ninth Circuit and remanded it for further proceedings “Because there remain substantial questions about whether any of the named plaintiffs has standing to sue in light of our decision in Spokeo, Inc. v. Robins, 578 U. S. ___ (2016).”

By way of background. In Frank v. Gaos, plaintiffs brought class action claims against Google for alleged violations of the Stored Communications Act 18 U. S. C. §2701 et seq. (SCA), which prohibits “a person or entity providing an electronic communication service to the public” from “knowingly divulg[ing] to any person or entity the contents of a communication while in electronic storage by that service.” §2702(a)(1). The Act also creates a private right of action that entitles any “person aggrieved by any violation” to “recover from the person or entity, other than the United States, which engaged in that violation such relief as may be appropriate.” §2707(a).

According to plaintiff Gaos, the Internet search engine operated by Google would transmit information including the terms of the search performed by users to the server that hosted the selected webpage. This so-called “referrer header” told the server that the user arrived at the webpage by searching for particular terms on Google’s website. Gaos on behalf of the putative class action challenged Google’s use of referrer headers as violating the SCA.

Later Gaos’ putative class action was consolidated with a similar complaint, and the parties negotiated a classwide settlement. The terms of their agreement required Google to include certain disclosures about referrer headers on three of its webpages. Google could, however, continue its practice of transmitting users’ search terms in referrer headers. Google also agreed to pay $8.5 million. The funds wouldn’t be distributed to absent class members and the majority of it would be distributed to six cy pres recipients, which would benefit nonprofit organizations promoting “public awareness and education, and/or to support research, development, and initiatives, related to protecting privacy on the Internet.”

The District Court granted final approval of the settlement.

Meanwhile, after briefing before the Ninth Circuit was complete, but prior to its decision, the Supreme Court issued its opinion in Spokeo, Inc. v. Robins, 578 U. S. ___ (2016), which held that “Article III standing requires a concrete injury even in the context of a statutory violation.” Id., at ___ (slip op., at 9).

Since that time, no court in Frank v. Gaos has analyzed whether any named plaintiff has alleged SCA violations that are sufficiently concrete and particularized to support standing.

After certain class members appealed the settlement, the Solicitor General urged the Supreme Court to vacate and remand the case for the lower courts to address standing.

The Supreme Court reasoned that when the District Court ruled on Google’s motion to dismiss, it relied on Edwards to hold that Gaos had standing to assert a claim under the SCA. However, the Supreme Court’s decision in Spokeo abrogated the ruling in Edwards holding that “the violation of a statutory right automatically satisfies the injury-infact requirement whenever a statute authorizes a person to sue to vindicate that right.”

The Supreme Court – after oral argument and briefings – concluded that the case should be remanded for the courts below to address the plaintiffs’ standing in light of Spokeo before the District Court. The Supreme Court granted certiorari, 584 U. S. ___ (2018), to “decide whether a class action settlement that provides a cy pres award but no direct relief to class members satisfies the requirement that a settlement binding class members be “fair, reasonable, and adequate.” Fed. Rule Civ. Proc. 23(e)(2).”